Scott Adsit is the voice of the incredibly lovable, huggable, and caring marshmallow-like robot that you’ve seen in the trailers named Baymax in Big Hero 6.

Once you watch this film, you’ll notice the terrific job done by Adsit in voicing Baymax. Ryan Potter, who plays the robot’s counterpart in the film, had countless things to say about his acting, saying “Baymax and Scott, the two of them are amazing. Scott brings so much life to this character. It’s hard to make a robot lovable just because they’re robotic. But the voice and the heart that he lends to it, I think that’s why everyone is going to absolutely fall in love with Baymax.”

Adsit commented on how playing the voice of a robotic character was fun yet challenging “It was strange not to be connected to my emotions, but I had the challenge of finding my emotion within the very narrow envelope they gave me to work with.” Because Baymax is a robot, he doesn’t have any emotions, but there are still many emotional scenes in the movie that Baymax is a part of. “A really fun part about it was finding that emotion without showing that emotion [because he has a] “lovely soul and emotional center inside of him,” Adsit added.

What made his job even more challenging was that the cast wasn’t together even once during filming, per the usual way animated films are recorded nowadays. Nevertheless, it allowed all the voice talent to have a special bond with each other prior to getting to know their real personalities. “We were a company, an ensemble, for a good year and a half without ever seeing each other. So then when we did actually meet, there was a familiarity there. Our characters knew each other really well, we just didn’t know each other. So we felt an immediate kinship.” Their friendship was actually one of his favorite parts about working on the film. He loved meeting them and “feeling that family come together.” 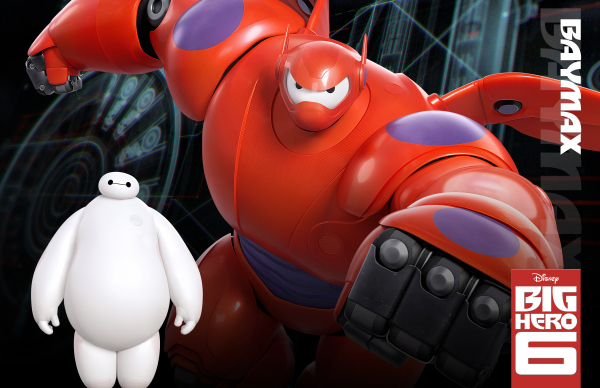 That feeling of family ultimately will flow down into every type of audience when they see the film according to Adsit. “This is great because I can’t think of anybody who wouldn’t enjoy this.” He very much enjoyed working on this family-friendly film and said, “the other stuff I’ve done generally has been for an adult audience, and this is for everybody. So it’s nice that I’m doing something that everyone in my family can see.” He gives his all to his character and is able to give a part of himself to this selfless, helpful, and protective character that is Baymax.

Get ready to meet him and the rest of the “6” this Friday. But before then, be sure to catch our coverage of the red carpet world premiere TOMORROW, Tuesday, November 4 on Twitter and Instagram beginning at 4 PM PT!

Are you excited to #MeetBaymax? Do you think you’ll love him? If so, why? Let us know in the comments!

Walt Disney Studios writer at DisneyExaminer. I'm prone to believing in magic, talking to mice and occasionally losing my shoes. Reach me at falak@disneyexaminer.com.