Inon Zur is an acclaimed Isreali-American composer who has worked in movie, television, and video game industries. He has composed music for video games such as Fallout 3, Dragon Age: Origins Awakening, and Soulcalibur V. After many hours of creating unique mixes in “Disney Fantasia: Music Evolved,” we were able to find the time to conduct an interview with Inon Zur, the composer of the musical themes in the game.

What does it mean to you to be a part of something as iconic as “Fantasia”?

It means a great deal on several levels. “Fantasia” was always the symbol of the cutting edge of technology, inspirational art and in general media at its best. “Fantasia” was also identified with presenting the best music out there to the audience. Suffice it to say the fact that I was asked to participate and contribute to this beloved franchise is one of the highs in my career so far.

What were your influences while you were composing the musical themes for Disney Fantasia: Music Evolved?

I wanted to compose music that will represent the combination of classical music, Disney’s music world and storytelling. So, I chose the influence of the romantic style of 19th-20th Century music. I thought that this would tell the story in the best way. I was also looking to capture with this music the magic and wonder that is such a great part of “Fantasia.” Last but definitely not least, I was extremely inspired by the amazing visuals of the game itself – this contributed a lot to what I ended up writing.

When you were composing the music for this game, what was your overall process when composing each song? On average, how long did it take for you to compose a song for this game?

I think that composing the themes was the most challenging task. I composed two whole pieces for the Main Theme that we ended up not using, and only the third one gave us what we were looking for. The composition process for the themes was very inspiring with creative freedom – I was not bound to any picture, story or set of requests. All I knew was that I needed to write a 2.5-3 minute piece that says: “Fantasia,” or “Scout” or “Yen Sid” and so on.

Later on I worked on a few cinematics that are featured in the narrative portion of the game, as well as writing music for several of the worlds in “Fantasia.” Writing a song can take between 2 hours to a whole day.

What did you find most challenging while you were composing the music for this game?

One of the challenges was to compose music that is both iconic and catchy but also sophisticated and intricate. I wanted the “Fantasia” motif to really resonate with audiences as “Fantasia”, and to be very memorable. This was definitely very challenging.

Another challenge was to connect the icon that is “Fantasia” with the world of video games, and write music that will speak to both music lovers and gamers. I remember that before I started composing we asked ourselves, “So what is Fantasia?” and “How can we describe Fantasia with original music?” These questions were foremost in our minds when deciding the approach to take.

One other very important aspect was when you know that the music you write will be put side by side with the all-time legendary composers of the world, that creates a bit of pressure.

What were your thoughts when you first you heard/played the various remixes of your songs (“Theme from Fantasia” and “Scout’s Song”) that are featured in Disney Fantasia: Music Evolved?

I thought – this is very innovative and clever. I think that the artists who performed the remixes really understood my music, but also were able to transform it into something totally different. It takes quite a talent to maintain the same musical content and to bring it out in a whole different way. Very impressive.

As a musician, do you think that Disney Fantasia: Music Evolved has the potential to inspire the next generation of children to become more involved with music?

Yes, this is exactly what inspired us all when we worked on “Fantasia: Music Evolved.” Connecting young people with music, teaching them about music and flaring the love for music was the main task and aspiration. Every effort and aspect in the game’s creation was influenced by this notion. This is why you can take the music in the game and break it down to its individual components, change it and alter it in many ways; and why the selection of music in the game stretches from the classical masterpieces to the contemporary music of our day. It’s also why there are several “remixes” of pieces – to teach different approaches to musical composition. And there are so many more aspects that all aspire to our goal – to connect and inspire people of all ages with and by music.

I feel that the game was created to do just that, and will do it very effectively.

Finally, what is your favorite moment from the “Fantasia” movies?

I really liked the simplicity but genius presentation of the Toccata and Fuge segment in the movie. It shows the music purely by shapes and colors – so innovative, so clever but yet such a simple approach. I was always taken by that. The world creation set to the “Boléro of Ravel” is also one of the highlights for me.

If you want to hear some of Inon Zur’s music from “Disney Fantasia: Music Evolved”, then go ahead and purchase it on iTunes or Amazon…or participate in our giveaway to win a copy for yourself! Just enter using the widget below.

Our special thanks to Inon Zur for taking the time to chat with us!

Do you appreciate the music of video games? Do you think they add or detract to the gaming experience? Will you be buying this soundtrack by Zur? Comment and tell us below! 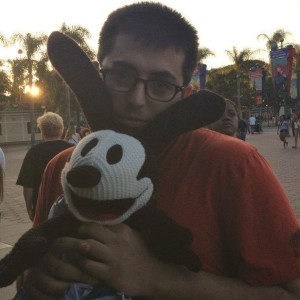 Podcast host, writer, account manager and voice of dissent at DisneyExaminer. If I had to be stuck on a deserted island with two Disney characters, I'd choose Wall-E & Oswald the Lucky Rabbit. Reach me at andy@disneyexaminer.com or tweet @MrSlyGuyInDaSky