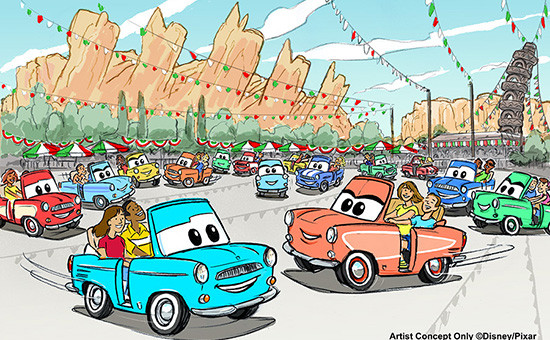 On Monday, February 16, 2015, get ready to see some flat tires at Disney California Adventure Park.

Luigi’s Flying Tires attraction in Cars Land will be closing at the end of the operational day that day to make way for a new attraction after only two years in operation.

The reasons behind the closure have been rumored, but most likely due to the low satisfaction ratings of guests who’ve climbed aboard the tires (which was modeled after the popular Flying Saucer attraction that was in Tomorrowland).

Apparently nostalgia didn’t “fly” with guests in this generation, so Walt Disney Imagineers have created a new attraction that would increase guest satisfaction all while still telling the story of Luigi from the animated film.

“We’re very excited to bring [guests] a new chapter in Luigi’s story, and we can’t wait for guests to experience this new attraction,” Kris Theiler, the relatively new Vice President of Disney California Adventure Park said in the announcement this morning.

Aside from her statement and touting that the new attraction will “feature a new ride system and ride vehicles,” this morning’s announcement was very minimal, not even commenting on the name of the attraction or the story it will tell.

They did include concept art of the new attraction that we’ve included above. From the looks of it, we’ll still be doing more driving and dodging others in close quarters like we did before.

Disneyland officials also announced that the reimagined attraction will open sometime in early 2016, right in the middle of the Disneyland Diamond Celebration.

Maybe we’ll see some “diamond-ized”  hood ornaments on the cars!

Remember to check out our friends at Small World Vacations to book your Disneyland Resort vacation to see the new attraction next year.

What are you expecting from the new attraction? Do you think Cars Land will be the same without the tires? Comment below and share your thoughts!