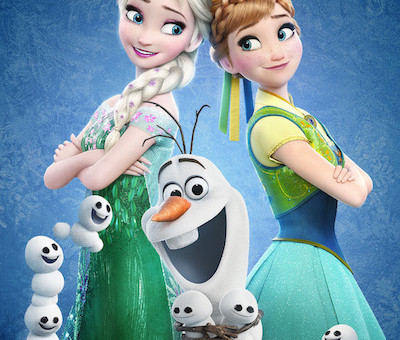 It’s probably a common question among the entire world on why Disney decided to create the new animated short set to debut in front of the Company’s live-action remake of Cinderella. After all, it has only been two years since we first laid eyes on the city and people of Arendelle and we clearly haven’t forgotten it all since.

So, why? The answer came in many forms, yet was plainly obvious according to Academy Award-winning director Chris Buck and producer Peter Del Vecho who both helmed the landmark animated film and joined us for an exclusive interview.

“It was so clear to us when we finished the movie (Frozen) and watched everyone’s reaction on social media that everyone related to and fell in love with all the characters,” Del Vecho began.

That immense love for the characters drove Buck and Del Vecho, as well as original co-director Jennifer Lee to sit down and settle on a story. “It was around March 2014 that the idea for the short first surfaced, just around the time that Frozen released in Japan, that we wanted to see if we could extend it.” It didn’t take them long before an idea came along.

Story artist Mark Smith essentially asked “What if Elsa got a fever?” It was a very simple idea, but it’s what made sense for the goal of the short (or any short film for that matter). “There’s no way that we could do the deep character arcs like we did in the feature film,” Buck said. “The fever idea sparked a lot of ideas from all of us and it ultimately just all worked out for us and for us to just have fun with Elsa’s character.”

Although simplicity was with the story, there still was an emotional core to the short. “Because of her powers, Elsa didn’t have any time with Anna and especially celebrate birthdays together,” Buck continued. “We blended both simple fever story with the emotional center of having Elsa throw Anna something simple yet heartfelt like a birthday party.”

After meeting more and honing the story idea with their chief creative and animation icon John Lasseter, Elsa getting a fever was greenlit and production began and completed nearly a year later this past February.

Still in that time, many at Disney Animation were wary about pursuing the short. According to an interview with BuzzFeed, Buck and Lee both didn’t know what exactly people liked about the film. The reality was that people of all ages and ethnicities did and that was validation enough for higher-ups at Disney and the creative team to move things forward.

Aside from the story and creative concerns, Frozen Fever was created for many other reasons.

The entire original voice cast including Kristin Bell and Idina Menzel were eager to return to lend their voices for the short. “There were no hesitations from the cast and crew,” Del Vecho commented. “A lot of the actors were in different places placing a logistical challenge, but got through it because the desire for them to do this was always there.” The entire crew of animators at Disney also were willing to return to support the effort.

Also, the Academy Award-winning songwriting couple from the original film Robert and Kristen Anderson-Lopez were eager to return to create the catchy song that lasts nearly half of the entire 7-minute short. “There was a lot of back and forth between us and them,” said Buck who said that had to happen in order for the story to once again be told through the song. The result is a song that will get stuck in your head again.

Most importantly, the fans’ love, not just the creators’ love for Frozen, was also a main driver of doing the short. Buck and Del Vecho reiterated that the short wouldn’t have been made if they and the world didn’t have that original love they had for the franchise and everything in it, including the fun Easter eggs that Disney hides in their animated films.

“We won’t say where, but there is a Disney character not from Frozen in there somewhere,” Buck hinted.

Amid all the reasons why they wanted to do a short, everyone involved with the film knew that Frozen and Frozen Fever were products of a revitalized Disney Animation that promises to tell more memorable stories to serve the greater demand of Disney storytelling than ever before.

“Frozen has clearly resonated with the public, but it won’t seal our success,” Del Vecho said commenting on the recent Oscar wins for Big Hero 6 and Feast. “The studio is getting stronger in its storytelling and we love where it is at this point.”

And who could argue with them. That sentiment transcends the walls of the Walt Disney Animation Studios and flows down to us through the original Frozen film, the new short, the endless merchandise, and the upcoming iterations of the story that are to come.

We can’t forget about the Frozen Broadway musical for which Lee is heading up according to Del Vecho and the attractions that are coming to Walt Disney World. Rumors are still swirling about the full-length sequel, too.

So although we feel like we’re getting too much of the icy world of Arendelle, the main reason we’re getting an animated short and even more Frozen is a “short” and simple one – love.

Love from the fans, love of the creators.

Watch “Frozen Fever” in its entirety exclusively with Disney’s “Cinderella” due out tomorrow.

Do you think the short will heighten your love for the “Frozen” franchise or diminish it?