Vacationing is still an important part of living and vacationing to places like Disneyland and Walt Disney World still tops the list of go-to places for those around the globe.

Still, Walt Disney Parks and Resorts are also notoriously known for their premium prices just as much as their magical experiences. Annual price increases for admission ticket media for namely the domestic U.S. theme parks have driven a negative sentiment, but positive revenue streams as more and more people want to buy before the next price hike.

Based on the trends, the increases in ticket prices and even “necessities” like food and souvenirs aren’t stopping families and individuals to flock to the Magic Kingdoms year after year. Instead, the real question for most is which one to go to.

Potential visitors to any vacation destination still have budgets to abide by, even those who want to visit a Disney Park or resort. For those planning to visit Disneyland or Walt Disney World in the near future, here’s a handy graphic that shows, on average, how much it is to travel to either. 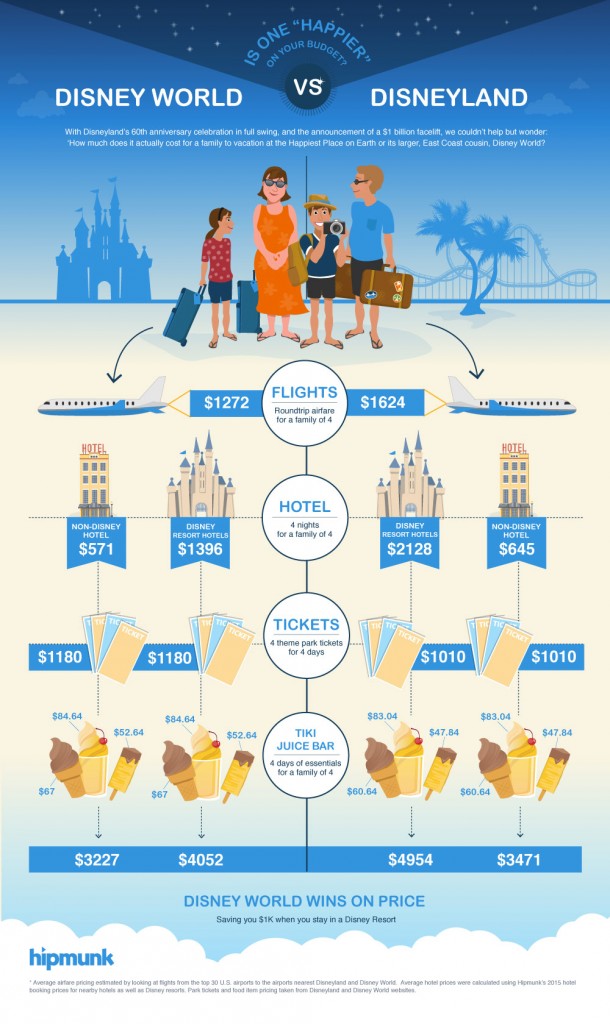 Note that the graphic takes into account a “vacation visit”, which includes airfare, hotel (on Disney property), tickets, and “food” all for a family of 4.

According to the research, Walt Disney World actually came out victorious when it came to savings (close to $1,000). It’s a surprising result since the Florida resort has more to offer and therefore usually resorts to longer stays. However, California does have a higher cost and tax rate for visitors and locals alike which might give reason to the higher pricing.

What is common through both resorts is the above average pricing to vacation at either locations. With popularity surging for Disneyland’s 60th anniversary and all the new additions coming to Walt Disney World in the near future, it’s clear that the pricing game will continue. Disney has even made it “easier” for families to save and budget for their next Disney dream vacation through the creation of their own savings program.

In the end, it’s a revenue game where Disney might win and the middle class might continue to lose.