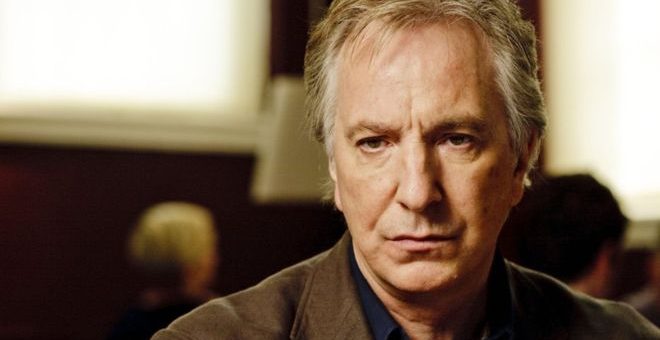 It’s strange to think that it has been four months since Alan Rickman passed away suddenly from pancreatic cancer. Many continue to mourn his untimely death, especially fans who knew him best as Severus Snape from the Harry Potter movies. A man as talented as Rickman has been in many films over the past 30 years besides Harry Potter, including Die Hard, Robin Hood: Prince of Thieves, Love Actually, and Alice in Wonderland to name a few.

In fact, the final film Rickman completed before he passed away in January was Alice Through the Looking Glass where he returned to provide his smooth baritone voice to the Blue Caterpillar, Absolem. In the most recent trailers and teasers for the film we see Absolem as a butterfly guiding Alice back to Underland as he tells her “You’ve been gone too long, Alice.”

“Absolem is the wise, mysterious, oblique person that he is in the books. From the first movie, Alan absolutely nailed it,” said director James Bobin to Total Film magazine earlier this year in a tribute to Alan Rickman. “And he really guides you into our movie. It starts with him, and he takes Alice back.”

Although Absolem’s role is small in Alice in Wonderland and Alice Through the Looking Glass, viewers can really see how important he is through the subtle, yet grave performance Rickman gave.

Alice Through the Looking Glass takes place three years after the events of Alice in Wonderland where Alice Kingsleigh, played by Mia Wasikowska, must return to Underland to face a new and dangerous threat in order to save her friends. Sacha Baron Cohen portrays Time while Johnny Depp returns as the Mad Hatter, Anne Hathaway as the White Queen, and Helena Bonham Carter as the Red Queen.

For fans who wish to honor Alan Rickman and experience his work once last time, Alice Through the Looking Glass hits theaters on May 27th 2016 in the United States.

Writing Intern at DisneyExaminer. If magic was real, I'd make it so every day was like a Disney musical. Reach me at arielle@disneyexaminer.com