Zootopia has become one of 2016’s most popular Disney movies, and a big part of its popularity has to do with its spunky protagonist, Judy Hopps.

Judy is smart, kind, and determined, and I really admire her character (especially since she doesn’t let her size stop her from succeeding). So it was no surprise that I jumped at the opportunity to talk to Judy herself.

Imperson, a Disney-supported company that helped create other chatbots like the previous one I spoke to, Miss Piggy, has now released a special Zootopia chatbot featuring Judy herself. I took some time to talk to Judy, and she brought me through a number of cases in order to see if I could earn my ZPD badge.

Check out our conversation below – it’s a lot of Judy leading and me fangirling. In fact, Judy took me straight onto a hypothetical case right away: 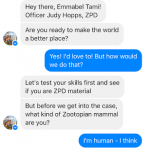 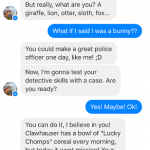 As you can see I was very excited to have solved the case, but Judy’s messages seemed to be a little mixed up. Once I guessed it, however, she took me right into another case, where I started to bring the conversation towards Nick Wilde (we didn’t get much on that subject, however): 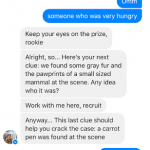 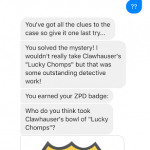 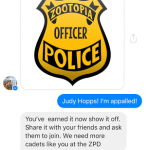 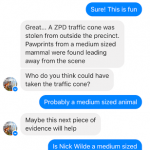 I guessed the right answer eventually and Judy gave me another badge. With two badges under my belt I tried to go for a third, but Judy had to leave, unfortunately: 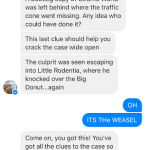 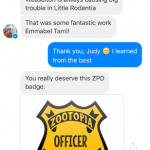 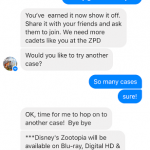 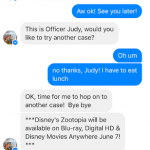 This chatbot seems a little less sophisticated to me than the last, but then again it may simply be easier to direct conversation with a demanding character like Miss Piggy. Judy’s conversation seemed a little out of order, and also didn’t seem to stop when we said bye, which was a little strange considering how she said she had other, more real cases to attend to.

In any case, it was fun to talk about different cases with Judy, and I think chatbots like this cater to the fan’s desire to speak directly to Disney characters – which we’re now able to do with the help of Imperson.

Talk to Judy yourself – I’m sure you’ll make a great ZPD officer too!