E3 started today and that means one thing for us: a brand new demo for Kingdom Hearts HD 2.8 Final Chapter Prologue! Fortunately my colleague Arielle and I were able to play the demo at a Judges day event hosted by Square Enix a few weeks back. The demo included a playable portion of 0.2 Birth by Sleep-A Fragmentary Passage as well as Dream Drop Distance HD. Each demo was around 30 to 45 minutes depending on how much time was put into exploring the surroundings. Here were our thoughts as well a mini review of each demo.

0.2 Birth by Sleep- A Fragmentary Passage 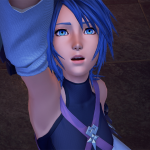 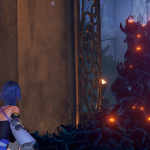 The game definitely brought me back to my Birth By Sleep days. I felt so nostalgic controlling Aqua again in a broken up dreamscape-esque version of the town from Cinderella. It was very refreshing to use the the battle mechanics of Birth By Sleep again. We were able to use the shotlocks and command styles that Aqua used.

The main point of the demo was to turn back time and restore the parts of town that were destroyed. In order to do that Aqua has to locate these giant, floating, steampunk-looking gears after fighting a small horde of enemies. The enemies we fought were the typical shadows as well as bat and fireball Heartless that would go berserk once they hit a certain HP.

Once all the cubes were broken we faced a huge cyclone-like boss that is comprised of hundreds of Heartless. At this point everything I did felt comfortable but fighting this boss definitely got me on the edge of my seat. Almost dying made me realize that I needed to step up my game but I finally took it down.

The visuals of the game using the Unreal 4 engine looked beautiful. I ended up looking up toward the night sky more than usual as I wandered around because it looked so surreal. It was also great to hear Willa Holland reprise her role as Aqua. The only downside of playing the demo was that Aqua looked a little unfinished, which was to be expected. 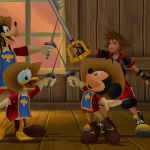 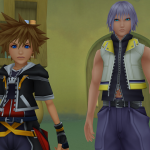 Back when I played Kingdom Hearts 3D [Dream Drop Distance] on the Nintendo 3DS in 2012, I always thought that the game should have been released on a home console due to how massive the game was compared to the tiny console it was on. Dream Drop Distance had massive areas, stunning animation quality that beat out all of the previous games in the series, and the story even felt bigger.

With Kingdom Hearts Dream Drop Distance HD, all of my thoughts back in 2012 have been realized. Immediately when I began the demo it was obvious just how much the game was suited for a home console. The development team took great strides to update the visuals.

There were three demos available to play:  Riku – La Cité des Cloches, Riku – The Grid, and Sora – Traverse Town. La Cité des Cloches, based on Disney’s The Hunchback of Notre Dame, had Riku face off against a massive Dream Eater called Wargoyle in the skies above Notre Dame Cathedral. The second demo on the Grid from Disney’s TRON: Legacy put Riku right into the middle of a lightcycle game and took us through Tron City to fight against waves of Dream Eater enemies. The third demo was based on an original Kingdom Hearts world called Traverse Town, where we played as Sora to try and reach the Fifth District where he faced off against Hockomonkey. This giant pop-up box enemy primarily used his fists and feet to try and take Sora out.

As I played, I found it difficult to acclimate myself to the brand new controls. Buttons have been remapped to the PlayStation 4’s controller, and the demo station I played in had an inverted camera. The camera often led me close to death multiple times, but thankfully I was reassured that the camera could be changed in the full version of the game.

Overall, Kingdom Hearts Dream Drop Distance HD looks beautiful thanks to the timeless designs of the series. Considering Dream Drop Distance is one of my favorite games in the series, I am excited to finally get the chance to play it on the PlayStation 4 this December and finally see the game brought to life on an HD console.