Earlier today directors Rich Moore and Phil Johnston, and John C. Reilly (voice of Ralph) announced a sequel to “Wreck-It Ralph” over Facebook Live. They confirmed that Moore and Johnston (who both worked on “Zootopia”) will co-direct this new film, and that Reilly will be reprising his role as Ralph. Sarah Silverman is also set to return to her role as the spunky Vanellope von Schweetz.

Unfortunately for the thousands of fans who tuned in this morning, Facebook Live glitched and left viewers hanging just after the main announcement was made. Luckily, Disney quickly fixed the frozen video, released more information, and presented further content over Instagram and Snapchat.

We know little of the plot so far, other than Reilly’s excited claim: “Ralph leaves the arcade and wrecks the internet!” Even though it’s only a sentence, however, this statement prompts many questions – will Ralph be joining the world of online gaming? Are we going to see the characters interacting with humans in the online world?

Of course, the questions that the first move raised are revived: will we see Disney’s other games and game-related lines like “Kingdom Hearts” or “Tron” in the sequel? Will the new movie go into Disney infinity, starting some sort of weird, meta, mega Disney character meetup? 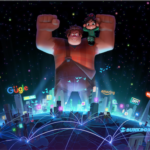 It’s hard to say right now. What we do know in terms of the “internet” aspect of the new film comes from the sites the new promo image parodies like “Gügle” (obviously Google) and “Amazing” (obviously Amazon). The image also shows lines connecting around the world, as the internet does – perhaps we’ll see Ralph and Vanellope as world travelers?

“Wreck-It Ralph”‘s sequel is already making waves, both online and in terms of Disney’s lineup: “Gigantic,” which was supposed to be set for March 9, 2018, has already been pushed back to November 21 of the same year to make room for Ralph and his new adventures.

Catch the sequel to “Wreck-It Ralph” in theaters March 9, 2018, and stay tuned for more news on the new film!