It truly was for Star Wars fans as Lucasfilm gave the world a great gift – the title of their next move as part of the new film trilogy with Disney. Episode 8 will be called “The Last Jedi” and the poster that debuted that title can be seen below.

Like all the secrecy that came with Episode 7/The Force Awakens, there is a lot of speculation on both the title and poster of the new film. For obvious starters, who is the last Jedi? At the same time, fans and Star Wars grammar snobs are actually quick to fire back a response in the form of a question: is it Jedi (singular) or Jedi (plural)??

It’s certainly a question worth asking as the ending of Episode 7 did leave us with the finding of one Jedi, Luke Skywalker, by one who is clearly exhibiting Jedi powers, Ray. Based off that context, fans are concluding that Luke is the singular last Jedi because of the title he was given in the opening crawl of “The Force Awakens”. 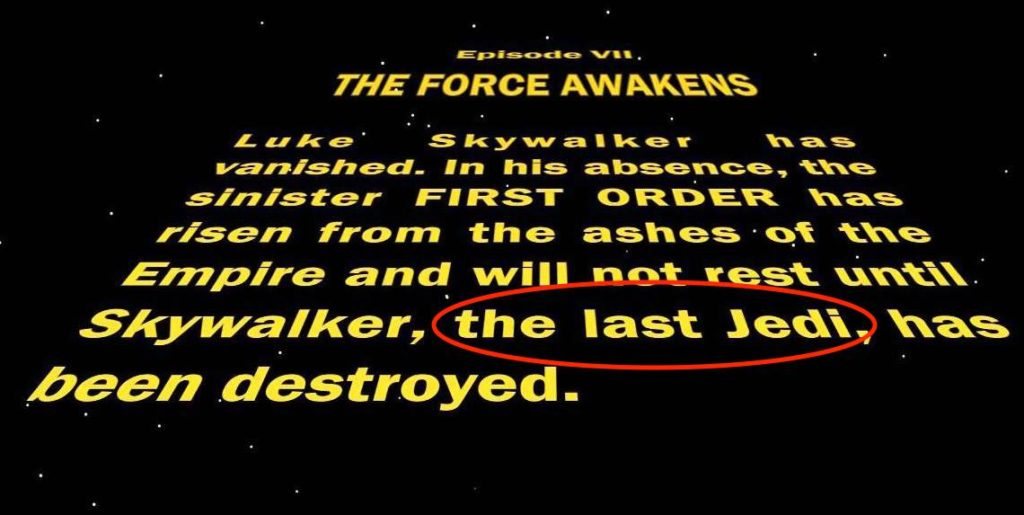 Still, it’s entirely possible that we could be thrown a cosmic curveball (and I secretly hope one is thrown)!

Regarding the poster, we get a red font Star Wars logo. Fans were quick to say that there might be some return of the long gone Sith movement that was “destroyed” until another version of them showed up as the bad guys in “The Force Awakens” called the First Order. This isn’t the first time that a Star Wars movie title card debuted with red font before either! Both “Revenge of the Sith” and “Return of the Jedi” also had red in their titles and both had to do with something that warrented someone in the film saying ‘I have a bad feeling about this.’

Production has officially wrapped in London with cuts and edits currently being made by director Rian Johnson.

Even with all these theories, we probably haven’t even scratched the surface of what will really happen in the film to continue the Skywalker story films. I personally hope “The Last Jedi” isn’t as predictable as “The Force Awakens” was.

Be sure to follow DisneyExaminer on social media for the latest Star Wars news, including a spoiler-free review of the film before the public release date!