A few weeks ago, our good friends at Sphero sent us their newest connected toy creation – Ultimate Lightning McQueen (ULM).

He’s an amazingly smart toy that was touted to be the most life-like toy (err…car) that the company has created. They previously made 2015’s most popular toy which was BB-8 toy from “Star Wars: The Force Awakens.”

Without going into too much detail, ULM packs a lot of technology into a versatile toy that very much wants you to go play with it. Just like a car, he’s packed with more technology than you need to know that powers his engine and other features on the inside. And just like a car, the outer body that houses all the tech is incredibly durable yet incredibly detailed with Lightning’s iconic stickers and event reflections. The tires are made of a rubber-like material and glides through any surfaces so well it can do some pretty awesome donuts!

ULM is also very interactive and actually says things to you when touch him, keep him idle, and even while you watch Pixar’s “Cars” film. No joke!

As you might have seen during our unboxing video of ULM, we were pretty floored at how life-like the toy car was. So it was only fitting that we brought him to a very life-like place. Check out some of the pictures we took of him below while he drove through Cars Land at Disney California Adventure Park before the world premiere of “Cars 3” right across the street! Like Lightning himself, he was the talk of the town during our photoshoot/visit.

If you want to take home your very own Lightning, speed on over to Sphero’s website now. Ka-chow!

Our thanks again to Sphero again for letting us have our very own Ultimate Lightning McQueen for this story. 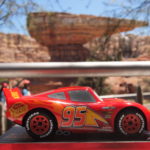 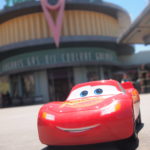 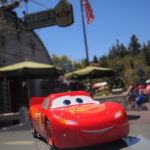 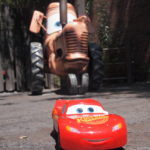 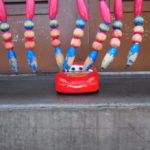 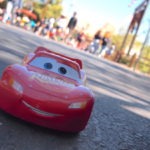 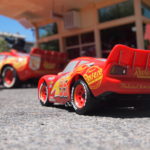 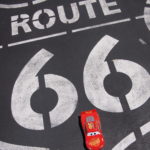 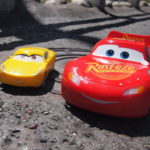 Lightning and his mentor from “Cars 3” Cruz Ramirez