Kingdom Hearts has been consistently popular since the first game’s release in 2002, even despite the length of time between Kingdom Hearts II and Kingdom Hearts III. Multiple games in between have given audiences an opportunity to become fans, making the fandom quite large.

Kingdom Hearts is engaging – both to old fans and new. Today, we bring you two reflections on the game and its popularity: one from me, a longtime fan, and another from Jordan, who only played the demo at a special event today.

From Tami, who’s been a fan since “Kingdom Hearts” was released in 2002:

The first big thing I ever bought with my own money was a PS2 and a copy of Kingdom Hearts (I saved up both Christmas AND birthday money for it!) So I think I and many others have loved it for a long time because there’s a major element of nostalgia involved while playing it. I tend to come back to it at least once a year, and every time I do I feel like I’m a tween again, playing during summer vacation.

That’s not to say the game doesn’t have appeal for newer fans. The music has always been captivating, and Utada Hikaru’s new song for Kingdom Hearts III is bound to be another hit. The game’s graphics are also improving from game to game – the difference between just Kingdom Hearts I and Kingdom Hearts II makes that obvious. It’s a beautiful game to watch and to listen to. In addition, the ability to literally explore reimagined classic Disney worlds I grew up with is an experience that many fans can relate to and are sure to find appealing in the new game.

Of course, the story of Kingdom Hearts is what drives every game forward. Some may find the extensive plot line confusing and off-putting, but the existence of a huge fandom proves that the storytelling is resonating with many people. And the coming addition of Kingdom Hearts III will, hopefully, encourage new people to play the older games too. 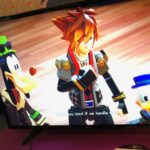 From Jordie, who only played the “Kingdom Hearts III” playthrough at the preview today:

Kingdom Hearts III was easy for me to play. In the demo, action prompts were highlighted. I played it on Xbox, and I think that made it easy for me. I did combination moves easily, and it felt good.

For me, the inclusion of Disney characters and settings made me feel like I had a connection to the game even without understanding Sora’s story. I felt like I didn’t have to know the 16 years of backstory. Knowing the story would be a benefit, but it doesn’t seem to be necessary to enjoy the game.

I look forward to playing Kingdom Hearts 3 but I wouldn’t be surprised if I decided to go back and play the other games.

From experienced fans to those with new interest, Kingdom Hearts 3 is sure to carry on the popularity that the franchise has enjoyed for so long. Stay tuned for more news about Kingdom Hearts 3!

**Note: all news about Kingdom Hearts 3 subject to change before its public release.