When you hear the words “salt” and “straw,” you probably don’t think of exotic ice cream. But that’s exactly what Salt & Straw the brand is. Starting as an ice cream cart pushed by co-founder Kim Malek in Portland, OR in 2011, the ice cream that she shared with her community is what has taken the world by icy storm. These handmade batches of ice cream include flavors like the classic Honey Lavender (the one that Malek first produced and got famous for), Black Olive Brittle & Goat Cheese, and more.
These crazy ice cream flavors and strong sales are the ones that ultimately brought shops to San Diego, San Francisco, Seattle, and Los Angeles in rapid succession over just six years. But it was the ice cream shop in Venice (a suburb of Los Angeles) that Malek had her own magical Disney moment.
“Some of the folks at Disney were customers at our Venice shop and were really big fans of the brand,” said Malek at the grand opening of their first location in Orange County, California – just outside the gates of Disneyland in Anaheim. “They are the ones who approached us about the opportunity to have a shop at Downtown Disney – we were all in.” And giving their all for Malek and her small team that includes her co-founder cousin Tyler knew that dealing with a large, established company like Disney would bring its unique challenges.

“We were excited at the prospect, but they wanted to know that we could be trusted and be good partners in spreading happiness to everyone,” Malek said. After a few months of the ‘auditioning’ process, Disney selected Salt & Straw to replace the previous ice cream store once occupied and operated by original tenant since Downtown Disney’s opening in 2000, Häagen-Dazs.
The ice cream shop at Downtown Disney has the same look and feel of the other Salt & Straw shops, with one distinction – the creative mind and resources of Walt Disney Imagineering. “We loved working with these Disney design masters to create a unique experience that still told the same ‘handmade’ story we’re all about.” That is seen through a lot of the hand-sculpted elements like ice cream cone-shaped handles to open the doors, abstract ice cream artwork, and even ‘ice cream totem pole’ at the entrance that isn’t at any of the other shops.
Once inside, you’ll find a curated ice cream menu with flavors that are only available at the Downtown Disney location. “It’s an Americana menu that’s really approachable to anyone visiting from out-of-town to the local,” Malek said. The classics like Honey Lavender are available there, but location exclusive flavors include “Pots of Gold & Rainbows” (made from Lucky Charms) and some seasonal flavors that change monthly.
Prices for a single scoop of any Salt & Straw ice cream flavor is $6, double scoop is $8, and waffle cones are $1.50 extra. Annual passholder discounts apply.
While we think many local Disneyland Annual Passholders in Orange County will be some of the most lucrative customers, it’s not stopping Malek and her team from dreaming bigger. As with many tenants of Downtown Disney businesses, they often are given the opportunity to open other locations at other Disney properties around the world. When asked if Malek had any thoughts on that, she simply said, “It would blow my mind. If we can further the relationship, our dreams could further, too.”
Salt & Straw at Downtown Disney District at the Disneyland Resort is now open daily from 10 AM to 12 AM. 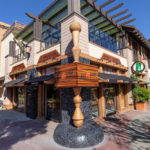 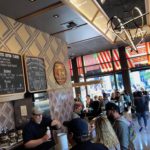 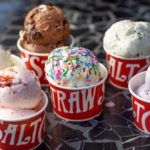 Our special thanks to Kim Malek and the Salt & Straw team for her time in contributing to this piece.
print