I’ve been to the beautiful space that is the Walt Disney Animation Studios many times before. We’ve gone for early looks at films, screenings, and even to give you a tour of the actually building where Disney Animation makes its animated blockbuster hits. I thought I saw everything. Until I didn’t.

Just off the main commune area loving known as the “Caffeine Patch” (a reference in Disney’s “Meet the Robinsons”), I was escorted into a “production pod.” These were always closed off to me and visiting press as these are the private areas where Disney Animation’s next films are being cooked up. I entered the production pod for “Ralph Breaks The Internet” and saw a lot of concept art that referenced things that most have already seen in the recent trailers, but also some conceptual and experimental images as well.

VR is quickly becoming more a part of our lives than ever before thanks to easier access and affordability to platforms made by Oculus, HTC, and others. The one thing that is arguably the more difficult challenge that VR as a platform is facing is what to do with it. What about putting on a headset will be convincing enough to do it every day? What will make us want to invest in buying one and making it a part of my life? Why should I even buy a headset in the first place? 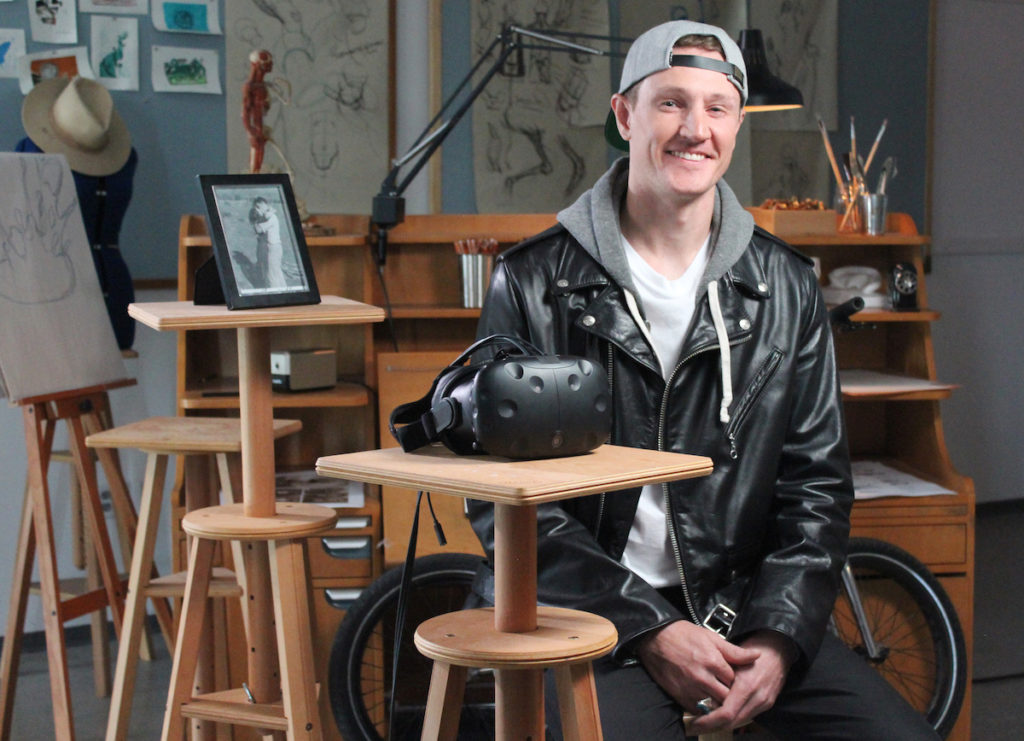 For Walt Disney Animation Studios’ Jeff Gipson, these questions never surfaced when he thought of using VR as a canvas to tell a story he had in his mind. Instead, he thought of how VR as a storytelling tool could pull the viewer even deeper into itself. Together with his story in mind and a very talented team of production artists and technologists at Disney Animation, they created Disney’s first-ever VR animated short entitled “Cycles.”

Like other shorts that come from Disney Animation and Pixar, “Cycles” came from a voluntary competition that allows all employees (from janitor to senior production artist) the opportunity to get a short film they dreamt up made. Should it get selected by the senior creatives at the studio (called the Story Trust), they are given the resources to go and make the short that most likely will debut in front of a future feature film the studio makes.

Gipson’s story was a compelling one as it came directly from his loves of architecture (he previously was an architect before coming to Disney Animation as an artist), BMX biking, and his relationship to his grandparents. As an architect, he became fascinated with the abandoned homes that littered the hills in and around Los Angeles. These architectural masterpieces included elements and design that often doesn’t get seen in today’s homes and buildings.

It was his BMX biking desires that he even ventured up to these homes with empty pools to bike them. However as he biked, he realized something even more compelling about these homes: that life once happened in full there. “Exploring the abandoned homes and imagining the story from the present moment backwards through moments where the house was full of life and understanding what ultimately led up to its condition was really intriguing to me,” he said.

It all began to click when he was reminded of an intimate and emotional childhood story that came up in his past that involved having to help his grandmother move out of the house she lived in with his grandfather all their lives when his grandfather died. “Standing in the living room and imagining [my] story unfold around me through the space itself was such a cool feeling, I wanted to bring that feeling to life and share it with others.”

“From the beginning, the idea has always been envisioned as a VR story,”Gipson said to us back in September when we met him to watch his VR animated short. But since nothing VR had ever been done by Disney Animation in the past, a new process needed to be created and blend with a traditional pipeline that animated project go through. That is why the motion capture stage was created at the studio so that part of the 50-people filmmaking team could visualize the story as they made it through dawning a VR headset and handheld cursors to draw. 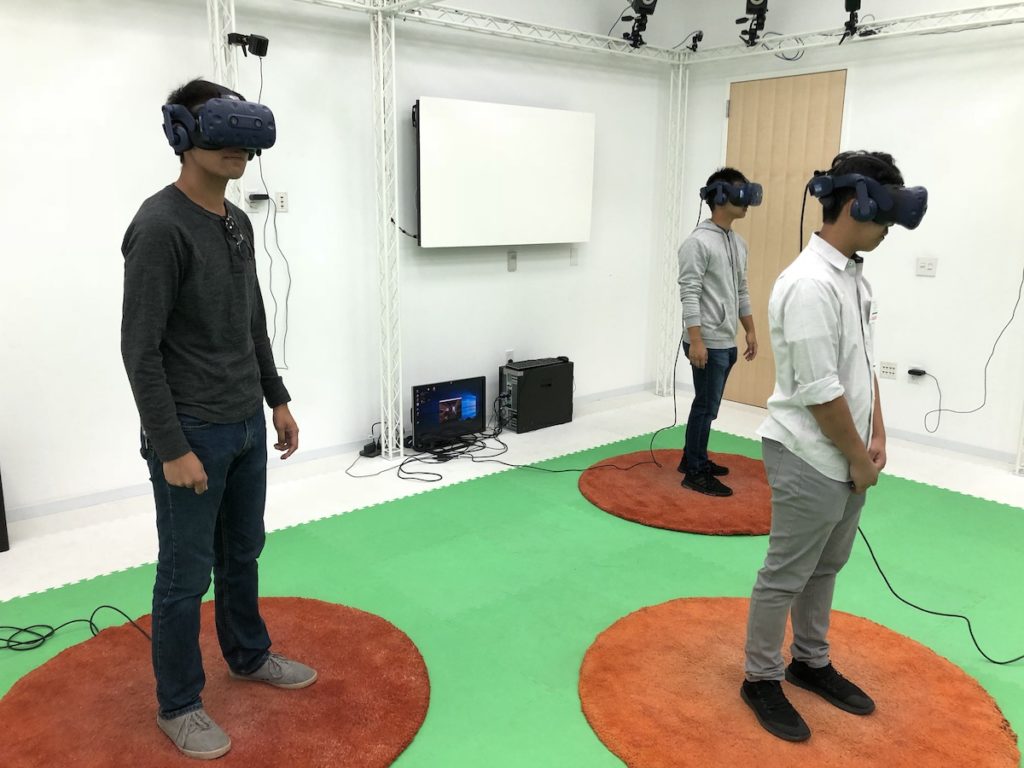 Me and my high school mentees watching “Cycles” in the motion capture stage at Disney Animation.

While many programs and tools needed to be invented to push the film to completion, it took only four months to create with a final film ready to present in November of last year.

The short film, just shy over 3 minutes in length, debuted at SIGGRAPH which is an annual gathering of computer graphics professionals. It was presented in a small space on the show floor, featuring just a few VR headsets and mats for viewers to stand on. Once a viewer strapped on the VR rig, they were asked to peer into a door so that the experience could begin.

They were immediately taken into a house that seems dark and sad. It actually is the setup of the film which shows the the two main characters, Rae and Rachel, discussing the same question that Gipson overheard when he was a kid about having his grandmother move out of the house she shared with Gipson’s grandfather, Bert’s, after his recent passing. From there, the house and the characters begin going through a flashback sequence that starts with the beginnings of filling that same home with life when Rae and Bert first move in. 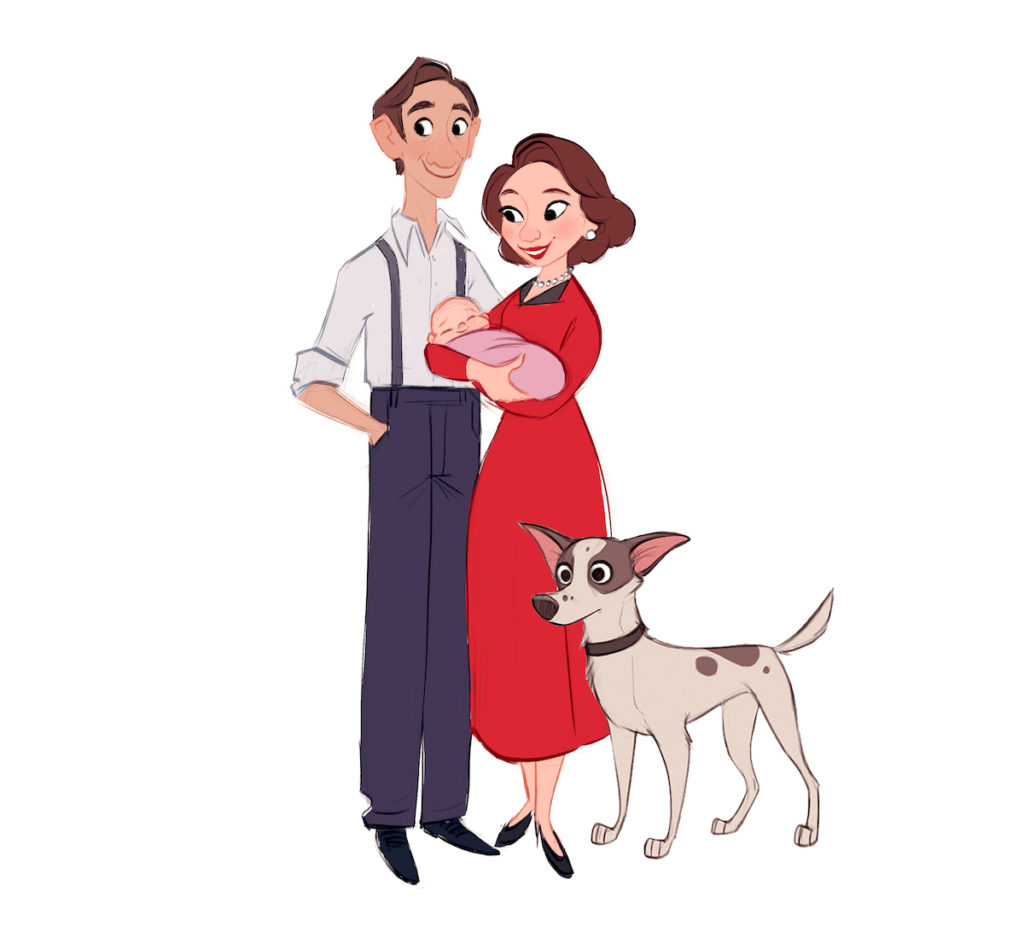 Gipson says that the use of timelapse was not only necessary for telling a full life story (in this case, it was 50 years), but to also guide the viewers eyes as the house and the characters changed around them. “VR opens a 360-degree storytelling canvas, so we needed something the help tour the viewer’s watching,” Gipson said. “We think our intentional use of time-lapse with the character’s locations in the house and lighting really achieved that.”

While we won’t give away the entirety of what happens in the short, including the last few seconds of revelation, we will say that “Cycles” is a classic, deeply emotional Disney Animation short that just so happens to be a VR film. Even if VR is not your “thing,” you may realize it is after you start to notice your VR headset is beginning to fill with tears or you become speechless the moment you see that bittersweet, almost melancholy ending shot.

It’s truly something that needs to be experienced in a VR format to fully get the emotional effect of the short, though Disney has explored the possibility of converting the VR film into a 2D version of the film. “It’s definitely a common question we get asked, but yes I totally think the film works in a flat 2D format,” Gipson said when asked about presenting “Cycles” in a flat format so it could possibly be seen in normal movie theaters in front of Disney Animation features like other shorts. “It has been cool to see how some of our editors – especially those who have not been closely involved with the VR version of the film – still connect emotionally in the 2D format.”

There is no guarantee that it will end up being presented in a movie theater in front of a feature or as a downloadable video from a VR content store. Currently, Disney has not announced plans to show the film apart from being at professional gatherings like SIGGRAPH and New York Film Festival where the short had its U.S. premiere last week. And it can be argued that they don’t want “Cycles” to be widely distributed because it was such an experimental project.

That experimentation continued further when Gipson showed off two uses of augmented reality (AR) that Disney tied to the official poster for “Cycles.” With an app on an iPad (and presumably an iPhone or other mobile device) pointed at the poster, the poster of a door leaps up to then open when you get closer to it to show scenes from the short played out. Imagine watching the lives of Bert and Rae play out as if you were a guest at their doorstep. The other AR experience used the same app and showed Bert and Rae dance together when the camera is pointed onto a flat surface. Both experiences used technology in such a way that the iPad faded from thought and all that was left was sharing an intimate moment with these characters.

It’s that intimacy and personal nature of the project that Gipson wanted to get across from the very beginning. It wasn’t about making history in creating Disney’s first-ever VR short or even finding reason to mess around with iPad and AR. It was all about telling a very personal story to another. Little did Gipson know that the reactions to experiencing this “life cycle” of this semi-fictional family would bring out the personal stories and emotions of others as well.

“I remember when we were showing the short to those at SIGGRAPH and people just came away speechless, but proceed to then tell their own family stories of living life in a place or places,” Gipson said. “So in a lot of ways, there was purpose in watching something in VR, AR, and anything else in between,” he continued.

As I left the motion capture stage and the animation studio, passing along the many animators and staff who call that magical place a “home,” I came to realize that purpose myself: that the reality of life’s cycles seen apart from the virtual is still quite beautiful.

Our special thanks to the Walt Disney Animation Studios; especially Jeff Gipson, Lauren Brown, and Garth Burkhard for contributing to this story.