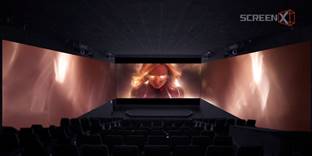 That’s because I was at a specially-designed theater that promised to immerse me further into what I was seeing from my seat. Utilizing the side walls of the theater as screens, my viewing of “Captain Marvel” became less about watching it and more being in it.

“ScreenX is the world’s first multi-projection theatre technology that allows a 270-degree panoramic movie watching experience, allowing the audience to go beyond the frame of the traditional movie screen,” according to the parent company CJ4DPLEX’s description of the tech. “[We utilize] a proprietary system to expand the center screen image to the side walls, surrounding audiences with imagery and providing a sense of being inside the movie.”

In short, ScreenX is an impressive moviegoing experience it creates has led over 200 theaters, both in the U.S. and abroad, having it installed with more to come as demand rises.

We connected with Paul Kim, VP of studio relations and ScreenX production to tell us more about what it takes to convert a standard movie into a more encompassing one.

The below interview was edited for clarity and conciseness.

DE: What are the steps in converting a movie into ScreenX format? Is it complicated?

PK: It’s pretty complicated, but keeping it simple, the steps include –

4) Once approved with a final cut, distribute Wings to ScreenX theaters

DE: Does new footage have to be shot on those side-screen Wings? Or is that created with what’s given in post-production?

PK: For Hollywood features, we have not yet shot anything for the Wings. Everything so far is created in post-production, but we are hoping to work with directors in the pre-production stage to shoot films in the format in the near future.

For our other films from Korea, China, we HAVE shot in the ScreenX format as we have specific cameras and rigs available for ScreenX production. To capture even the smallest of details and to maneuver in small spaces, we incorporate drone cameras for flexible filming possibilities. As you can imagine, with such a large field of view, there are a lot of creative storytelling possibilities.

We shot K-Pop band’s BTS <Love Yourself in Seoul> performance at Olympic Stadium live and was able to put together an incredible viewing experience for those who weren’t able to attend or for those who wanted to relive the experience. We also got in the pre-production stage with the South Korean horror hit ‘Gonjiam’ last year. It is a terrifying film that we were able to make even scarier. Imagine long corridors that stretch onto the walls of the theater, putting you smack dab in the middle of the action, or things flickering in your peripherals while dread and suspense fill the main screen. ScreenX is able to extend the story and atmosphere to draw you deeper into the film.

DE: Since this isn’t the first Disney film to be converted to ScreenX format (“Black Panther”, “Ant-Man and the Wasp”, “Star Wars: The Last Jedi”), what is your relationship like with the Walt Disney Studios?

PK: WDS approves films for the ScreenX format as well as help deliver the necessary materials/assets for ScreenX production. The post-production team is also responsible for quality reviews and approvals for our ScreenX Wings.

The great thing about Disney is that they’re very forward-thinking when it comes to emerging film technologies and although I can’t speak for Disney as a whole, those who we’ve been working with seem to really enjoy the format (otherwise, I’d imagine they’d stop making films with us in ScreenX). We’ve worked on a total of 4 films with the Walt Disney Studios and we hope to continue producing many more titles with them.

Our thanks to CJ4DPLEX for the opportunity to screen “Captain Marvel” in ScreenX, and Paul Kim for contributing to this story!