I was in the majority. After Disney announced that Pixar would be making another Toy Story film back in 2014, I was absolutely against it.

I had watched “Toy Story 3” with enormous tears in my eyes because the movie franchise that I grew up with was going to end. When Andy had transferred ownership of his beloved friends to Bonnie, I couldn’t have thought of a better way to end the toy story than with toys completing and continuing their purposeful mission.

While I was willing to let Woody, Buzz, and the rest of the gang go, Disney had always made it clear to audiences that it would make movies if there was a great story to tell. I trusted them and felt that the announcement of making a fourth film would indeed be a continuation of something that was generationally great.

That trust was tested with the multiple delays and changes to the creative team the occurred during the production process. That, along with the studio leadership changes with the ousting of John Lasseter made me already weary that this Toy Story sequel would be the first one I’d dislike.

But them moment I stepped into the El Capitan Theatre, sat in the chair, and the curtain opened, I had no idea that I’d be OK with how GREAT “Toy Story 4” ended up being!

The premise of the new film is actually quite straightforward: we were going to find out what happened to Bo Peep (who was ‘given away’ in “Toy Story 3”) through the eyes of Woody, whom we briefly saw had a romantic interest in Bo in “Toy Story” and “Toy Story 2.” And while the film does touch (and land) on what does come between Bo and Woody, the entirety of the film is dedicated to Woody and his character development.

For all it’s worth without going into spoiler detail, we’ve always known Woody’s obsession with his purpose. He recognizes that he’s a toy and that he’s meant to be played with by one owner forever. With each Toy Story film, it becomes clear to him that his original view on his life and the purpose of a toy are not what he thinks.

“Toy Story 4” expands into that recurring thought far further than any of the previous films had with the help of a new character you probably met already in the advance marketing of the film named Forky. While Forky is purposeful in the film, he by no means is at the center of it. It’s all about Woody and Woody’s story is revisited once again and at just the right time. All of this has been a lead-up into a film that’s so satisfying because there is a finally a conclusion to Woody’s story…or is there?

The ending of this film doesn’t hint at another film, but it certainly paves the way for another few films to come should Pixar find another story worthy to tell. I can only hope that it has all the elements of “Toy Story 4” that brought new life into the franchise.

Elements included funny. LOTS of funny. I was laughing through 3/4ths of the film and so was the rest of the very diversely aged audience. The writing team included funny moments with classic timing and easy jokes that everyone could understand. Delivery of the funny was also key, with new characters Ducky and Bunny (voiced by Jordan Peele and Keegan-Michael Key, respectively) and Duke Caboom (voiced by Keanu Reeves) powering it throughout. 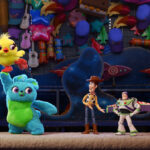 PICK ME! — Ducky and Bunny are carnival prizes who are eager to be won. But when their plans are rudely interrupted, they find themselves on an unexpected adventure with a group of toys who have no idea what it feels like to be tacked to a prize wall. Funny men Keegan-Michael Key and Jordan Peele provide the voices of Ducky and Bunny, respectively. Directed by Josh Cooley (“Riley’s First Date?”) and produced by Jonas Rivera (“Inside Out,” “Up”) and Mark Nielsen (associate producer “Inside Out”), “Toy Story 4” ventures to U.S. theaters on June 21, 2019. ©2018 Disney•Pixar. All Rights Reserved. 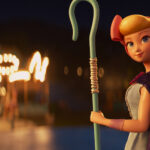 LOST AND FOUND – In Disney and Pixar’s “Toy Story 4,” Woody is reunited with his long-lost friend Bo Peep, who’s been on the road for years. She’s become an adventure-seeking free spirit whose strength and sarcasm belie her delicate porcelain exterior. Featuring the voice of Annie Potts as Bo Peep, “Toy Story 4” opens in U.S. theaters on June 21, 2019. ©2019 Disney/Pixar. All Rights Reserved.

It wouldn’t be a Pixar film either without the raw, authentic emotional moments, and “Toy Story 4” doesn’t hold back on these either. However, they all seem to come at a certain point in the film all at once. I don’t know if that was on purpose, but the moments were perfect because they made us recall things we saw previously in the film and made us think of the future that was to come because of them.

And that’s really a poignant theme to remember when you watch this movie. I really, really didn’t want a fourth Toy Story film to be made because I thought there was a fitting ending that made us recall why we loved these toys in the first place.

But just because there was a fitting ending doesn’t meant that we could have another film that would make us feel more deeply about Woody, Buzz, and the gang even more.

I’m super happy that “Toy Story 4” was made, and can only hope that this was another conclusion to an already great series of stories. If Pixar decided to make another one (or few) after it, however, I probably won’t mind it either now.