The first Frozen movie was an absolute hit. Kids were singing “Let It Go” and asking for Olaf plushies for years after the film was released.

One of the best parts of the first movie was that it wrapped up the conflict in a very satisfying way: we see Anna and Elsa rebuild their relationships (and their snowman), Anna punches Hans in the face and kisses Kristoff, and everyone in the kingdom is happy with their new queen. It’s a great ending to a great movie.

But of course, no movie can answer every question about its characters. Despite, or maybe because of, the comprehensiveness of Frozen, people began to itch for more of its story.

When Frozen II was announced, everyone had ideas for the questions it might answer:

Where did Elsa’s powers come from?

Does Hans come back?

Do Anna and Kristoff ever get married?

Will Elsa find her own romance?

If Elsa created a personal flurry for Olaf, does that make him technically immortal? 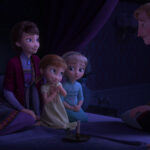 Jennifer Lee shared during a press day that the motivation to create Frozen II came naturally: as everyone asked her and director Chris Buck questions about the characters, they discovered they also wanted to continue the story.

“We realized that we had those questions—that we had more story to tell,” said Lee. “We weren’t ready to leave this world.”

Lee and Buck return to Frozen II along with the rest of the cast from the first film and a few new characters. The trailers and preview images show our favorite sisters in brand new outfits (pants!) and, of course, the presence of magical powers. 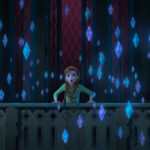 SPIRITS OF NATURE — – In Walt Disney Animation Studios’ “Frozen 2,” Anna (voice of Kristen Bell) learns that a voice has been calling Elsa, urging her to venture into the unknown where she must face the spirits of nature—wind, fire, earth and water. “Frozen 2” opens in U.S. theaters on Nov. 22, 2019. © 2019 Disney. All Rights Reserved.

I was personally afraid that Frozen II would fall into something a lot of sequels get wrong: becoming a slightly tweaked copy of its first film. Anna, Elsa and the conflicts they face in Frozen are so unique and complex. As they created the sequel, directors Lee and Buck and producer Peter Del Vecho had the added challenge of not only telling an original story, but doing it in a way that respects the first tale.

Frozen II does this in a beautiful way. It expands the world of Frozen, while still honoring the story, themes and tone of the first film. Rather than simply responding to questions, it takes the characters on a journey through the next stage of their growth—and gives us a few answers along the way. 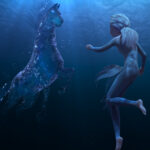 In Walt Disney Animation Studios’ “Frozen 2, Elsa encounters a Nokk—a mythical water spirit that takes the form of a horse—who uses the power of the ocean to guard the secrets of the forest. Featuring the voice of Idina Menzel as Elsa, “Frozen 2” opens in U.S. theaters November 22. ©2019 Disney. All Rights Reserved.

Songwriter Robert Lopez mentioned that the excellence of the film comes from the integrity of its creators.

“When [Lee, Buck and Del Vecho] first began this project, they didn’t think about trying to top the first one,” he commented. “They just thought about the characters and the story…We all fell in love with this continuation of story and characters.”

Frozen II is a wonderful return to Anna, Elsa and Arendelle. It does not seek to answer all questions. Instead, it gives us an honest perspective of what life might be like after the kingdom is saved and the villain defeated. The conflict is not shallow and the relationships are challenged realistically. You can feel how genuinely affectionate its cast and crew feel about the characters: each one is presented with love and respect for the growth they experienced in the first film.

The film feels less like a sequel and more like a genuinely good next chapter. And isn’t that how all sequels should be?